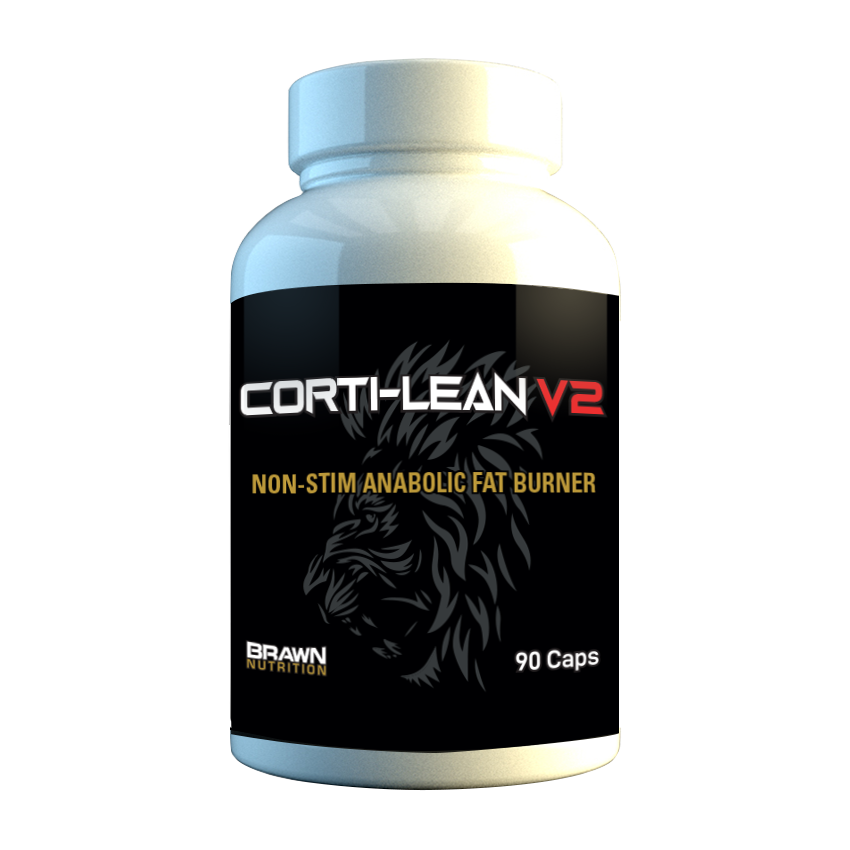 Stress has a devastating effect on the body, least of all its ability to help you gain fat fast thanks to the release of cortisol (known as the ‘stress hormone’),

Corti-lean is a non-stim, cortisol-reducing adaptogenic and anabolic fatburner. It reduces and regulates excessive cortisol release; which is conducive to any recomposition, weight loss or training goal you may currently have. Corti-lean has been formulated to stack with a stimulant based fat burner like ThermoLean or can be stacked with Thyrolean or Kamikaze to optimise stim-free fat burning. Cortilean can also be stacked with Test Complete, Recompagen, PCT Complete to potentiate gains or in a recomposition phase of training.

We have use specific ingredients, with the aim to help you achieve your recomposition goals. We believe in dosing ingredients at effective dosages, so… that’s what we have done in Cortilean, no expense spared once again. The ingredients we have incorporated are as follows:

KSM-66® is a high quality Ashwagandha extract produced by Ixoreal that was in development for over 14 years.

KSM-66 Ashwagandha has been clinically proven to increase serum levels of testosterone and luteinizing hormone (LH) in studies and also reduce serum cortisol levels by nearly 30%. In addition to helping optimize important anabolic hormones KSM-66 has also shown promise in promoting muscle size, increased strength in training. Also better performance, endurance as measured by VO2 max. It also has been shown to stimulate the thyroid gland, leading to a higher metabolism and studies showing improvements in body composition show the potential impact this ingredient has. KSM-66 has numerous hormonal balancing benefits and improving other physiological parameters such as the immune system along with improved cognitive function and feelings of well-being

In Corti-Lean, we use the clinically studied dose of 600mg daily.

5-Etioallocholen-3b,7b,17b-triol more commonly  known as androstenetriol or 5-AT is a metabolite of the ubiquitous endogenous steroid, dehydroepiandrosterone (DHEA). This compound has  been shown in studies to possess very potent anti-glucocorticoid activity in the body. This is highly beneficial as it directly and strongly suppresses the release of cortisol itself which is beneficial to any hard training athlete. Cortisol is a catabolic hormone and elevated levels of cortisol can lead to insulin resistance, reduced muscle protein synthesis, the breakdown of glycogen and suppressing your body’s capability of building and repairing muscle tissue. Even suppressing the immune processes involved in muscle growth. Enter Androstenetriol, which is one of the body’s most potent anti-glucocorticoids it produces. This ingredient adds to and is synergistic with the cortisol modulating effects KSM-66 has, as it addresses cortisol via a multi-faceted approach. Lowering and regulating excessive cortisol release.

Coleus Forskohlii has long been used in Ayurvedic medicine with regards to promotion of overall health and vigor. The primary active in the plant, forskolin, has received considerable attention from dieters due to its pro-weight loss and recomposition effects.

A 12-week study in men found that supplementation with forskolin, significantly decreased body fat percentage and fat mass. Researchers also observed a trend towards an increase in lean mass simultaneously. It has also been shown to optimise thyroid function and even increase testosterone levels.

The “magic” of forskolin lies within its ability to activate the cAMP pathway in the body. cAMP (cyclic adenosine monophosphate) is an important signaling molecule; used by cells for bodily function, including those tied to fat loss. Activating cAMP,  is a linked with numerous positive impacts on body composition such as increased fat utilisation, increased metabolism, vasodilation and reduced muscle breakdown. Forskolin is a potent non-stimulant fat burning agent and we use the 95% extract in Cortilean-Lean.

In Corti-Lean, we use 75mg of Coleus Forskohlii 95% extract per daily serving

Theobromine 99%
Theobromine is utilized as a vasodilator (for increased blood flow) and as a diuretic. In PCT Complete we use 50mg Theobromine 99% per daily serving.

BioPerineⓇ is a patented form of black pepper extract standardized for 95% piperine.

Bioperine has shown in studies to enhance bioavailability in supplemented ingredients, including both fat-soluble and water-soluble vitamins thus increasing the absorption of all of the aforementioned ingredients in Corti-Lean.

In Corti-Lean, we use 10mg of Bioperine per daily serving.

Take 3 caps spaced morning to evening per day. Do not exceed more than the recommended dose.